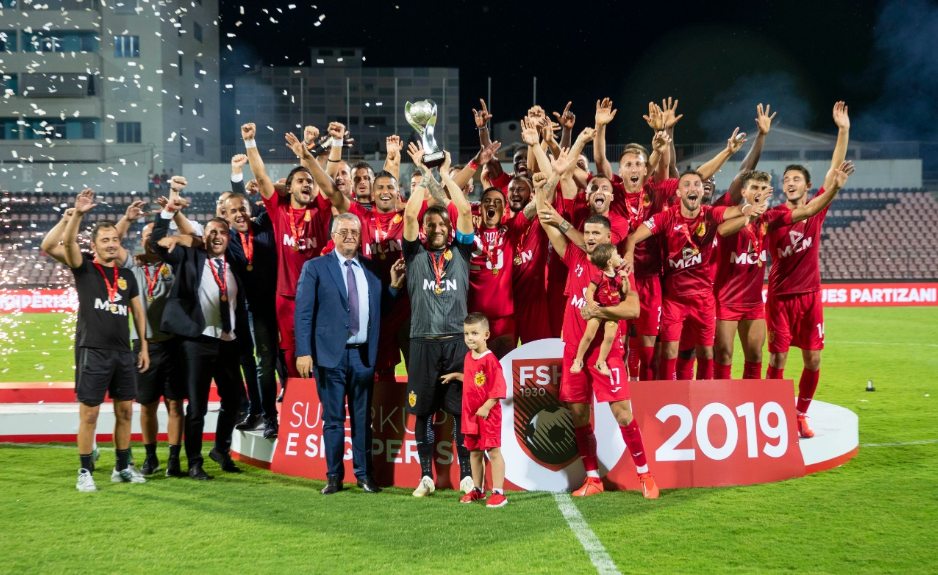 Partizani wins the Supercup of Albania

Partizani started the news season with a trophy, defeating Kukesi with the result 4-2, at the final of the Supercup of Albania, after extra time.

The match started well for Partizani, dominating the opponent since the first minutes of the game and scoring at the 6th minute with Esat Mala. The good game of the Reds continues with scoring opportunities but without finalizing. When it seemed that Partizani was controlling the game, Kukesi equalizes at the 39th minute with Musta. The first half ends 1-1. The second half starts with Kukesi on the offense, with Ethemi hinting the post at the 47’, after being in front of keeper Hoxha. The efforts of Kukesi are rewarded when Musta scores from the freekick at the 56’. Kukesi takes control of the game and they are close to the third goal. When everything was going towards the end, Partizani equalizes with Brown at the 88’. The Jamaican forward scores after a perfect volley from Trashi. The goal sends the match at extra time. The first part of extra time starts with a different Partizan, scoring immediately with Brown. After four minutes Brown scores again and seals the result 4-2 for Partizani. The result remains unchanged until the end and Partizani raised the trophy of the Supercup of Albania 2019.
The match was played at ‘’Elbasan Arena ‘’ and marked the beginning of the new season, with the Superior Category starting on Friday, with the opening match between Kukesi and Partizani, at Elbasan.

Lineup of the teams:

Football is more than a game! The legendary...